-A +A
Home / Discover / The essentials / Entrammes’ Thermal Baths

The Entrammes Gallo-Roman baths, that were discovered in 1987, are in a remarkable state of preservation.

The Entrammes Gallo-Roman thermal baths were discovered in 1987. At the end of antiquity, they were replaced by a church, which explains their remarkable state of preservation.

Thanks to this protection, rare relics have been preserved. These include 8.5-metre-high Roman walls, a row of four hypocaust-heated bath rooms, brick arches and windows as well as proof of religious activity at the site (ambo, sarcophagus, bell moulds).

A Story That Dates Back to the Gallic Period

It was in 1976 during an aerial survey that the presence of a former 50-hectare Gallic oppidum was discovered in the vicinity of what is now the Port du Salut Abbey. Thanks to this discovery, we know Entrammes’ early history. The Gauls settled between two branches of the river, forming natural moats, close to a ford that was on a main circulation route. This clever set-up was then taken over by the Romans. They did not stop here, however, and spread their hold of this secondary settlement as far as the current village. The most well-known part of this ancient history is undoubtedly linked to the baths. They were discovered by chance in 1987 during restoration works on the church. Following rehabilitation of the framework, the next stage was to scrape away the successive wall coatings. It was at this point that the original masonry work was revealed. It was made up of roussard sandstone rubble and bricks for the openings in particular. There were doubts as to the age of the site, but it turns out that the Entrammes church settled in a building dating back to the Roman era. Following this discovery, excavations were undertaken and the archaeologists discovered that the site was used for thermal baths.

Use of the Thermal Baths

Entrammes’ thermal baths are organised as a row of rooms. The user began in the changing room (the only room that is not aligned with the others). Then they went through the cold room and directly into the warm room where they could slowly get used to the heat. They could have massages here. They then entered the heat chamber where they would sweat abundantly. The doors then opened onto the hot room where the user could bathe in a large pool up against the gable end wall. To complete the ritual, it was necessary to return to the cold room and take a dip in non-heated water (a Roman tradition that is still in practice in certain Nordic countries).

From Hygiene to Worship

We do not know precisely when this large, public, Roman building ceased to be used, but we can guess that the barbarian invasions of the 3rd century disrupted daily life in the towns and villages of Roman Gaul. It is very likely that the building was abandoned.
Christianity came to the area and as the building was perfectly shaped for the needs of Christian worship, it transformed into a church. It was simply to do this by knocking down the partitioning walls between each chamber and lay a new floor. Liturgical furniture used by Early Christians (the first Christian churches) was set to the east of the new church. During excavations, the archaeologists unearthed three marble steps leading to the presbyterate and an ambo (a rostrum used to read from the holy books).
The excavations also brought other elements of church life to view, such as Merovingian sarcophagi and bell moulds from the 17th-18th centuries.
Today, this exceptional heritage is open to the public and is beautifully enhanced by a sound and light show. 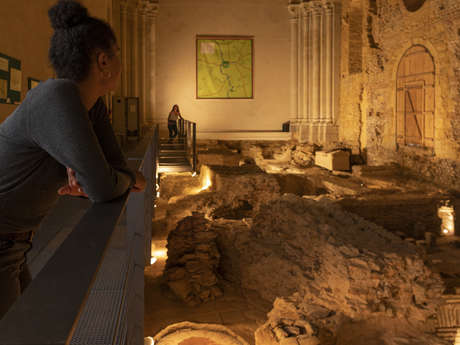 Open
Close
Back to homepage